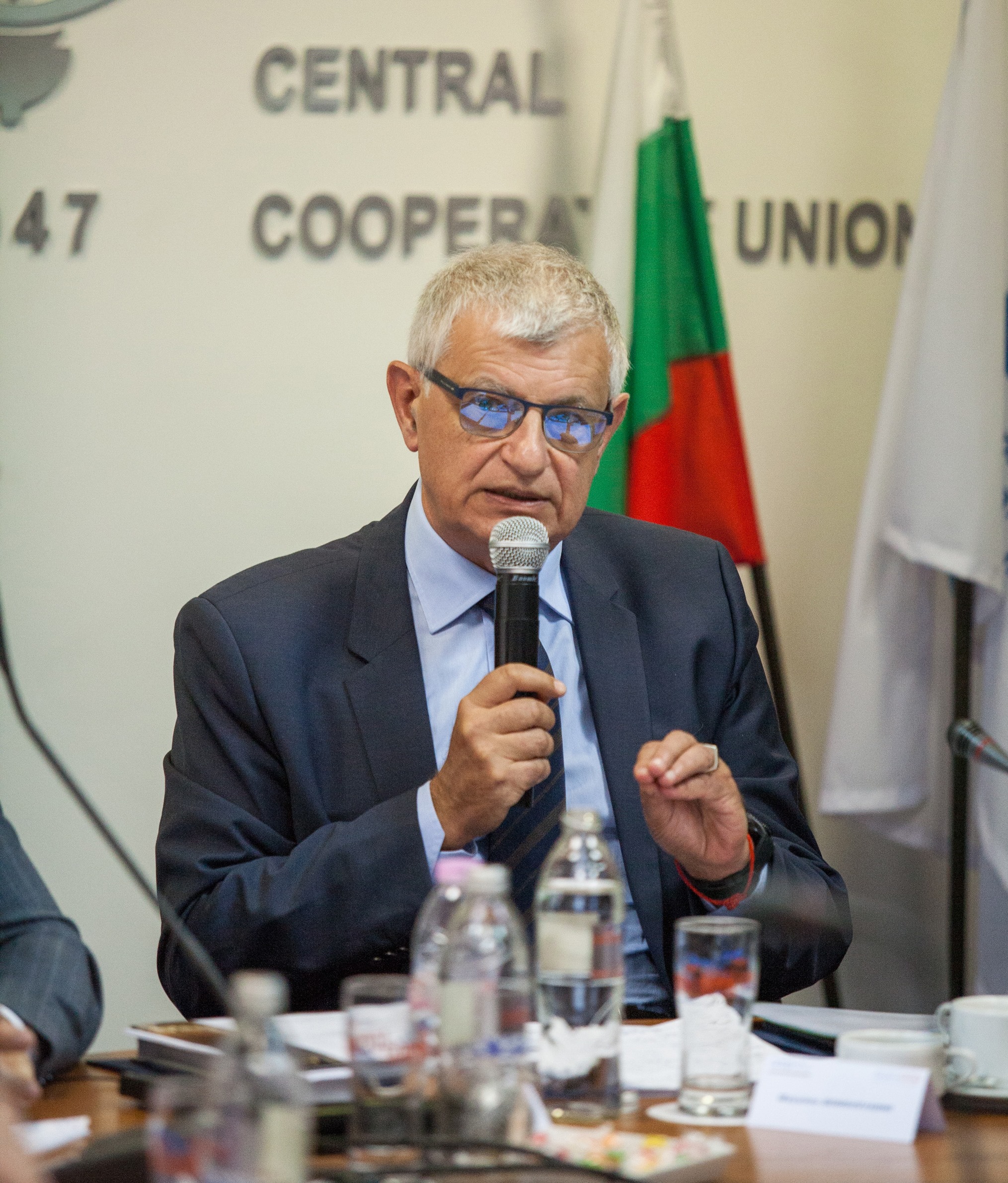 MB started with a reflection on the complex political issues which are nowadays afflicting Europe and the whole world. Notwithstanding, he recalled how co-operation is a living example of how to overcome difficult times and stay united. In this respect, he made an open wish that the work of the day could possibly contribute to find greater common ground on how co-operation should evolve from now until 2030 and beyond. PS underlined the importance of the conference to learn about the latest positive developments occurring within the co-operative network. He recalled that co-operatives are key actors of the social economy and stressed the need to engage in a co-ordinated action to influence the upcoming European Parliament’s (EP) elections. He pointed out that the EP hasn’t been supportive of the co-operative movement in these last years and that this needs to change, seen its economic weight and societal relevance. He then concluded by saying that the conference should be seen as the first brick to build a new direction.

Peter Hunt (PH) introduced the think tank “Mutuo”, the first cross mutual sector body to promote co-operative and mutual business to opinion formers and decision-makers worldwide. He then focused his intervention on the presentation of the draft Consumer Co-operatives Worldwide (CCW) Policy Guide, whose objective is to develop coherent policy positions that can be used by CCW members in multiple fora. He presented the results of the member survey, which provided the basis of the guide. The survey addressed a variety of issues, ranging from the relationships between co-operatives and national representative bodies, to co-operative membership and governance and relevance of own-brands. In relation to governmental actions, PH highlighted the following recommendations: 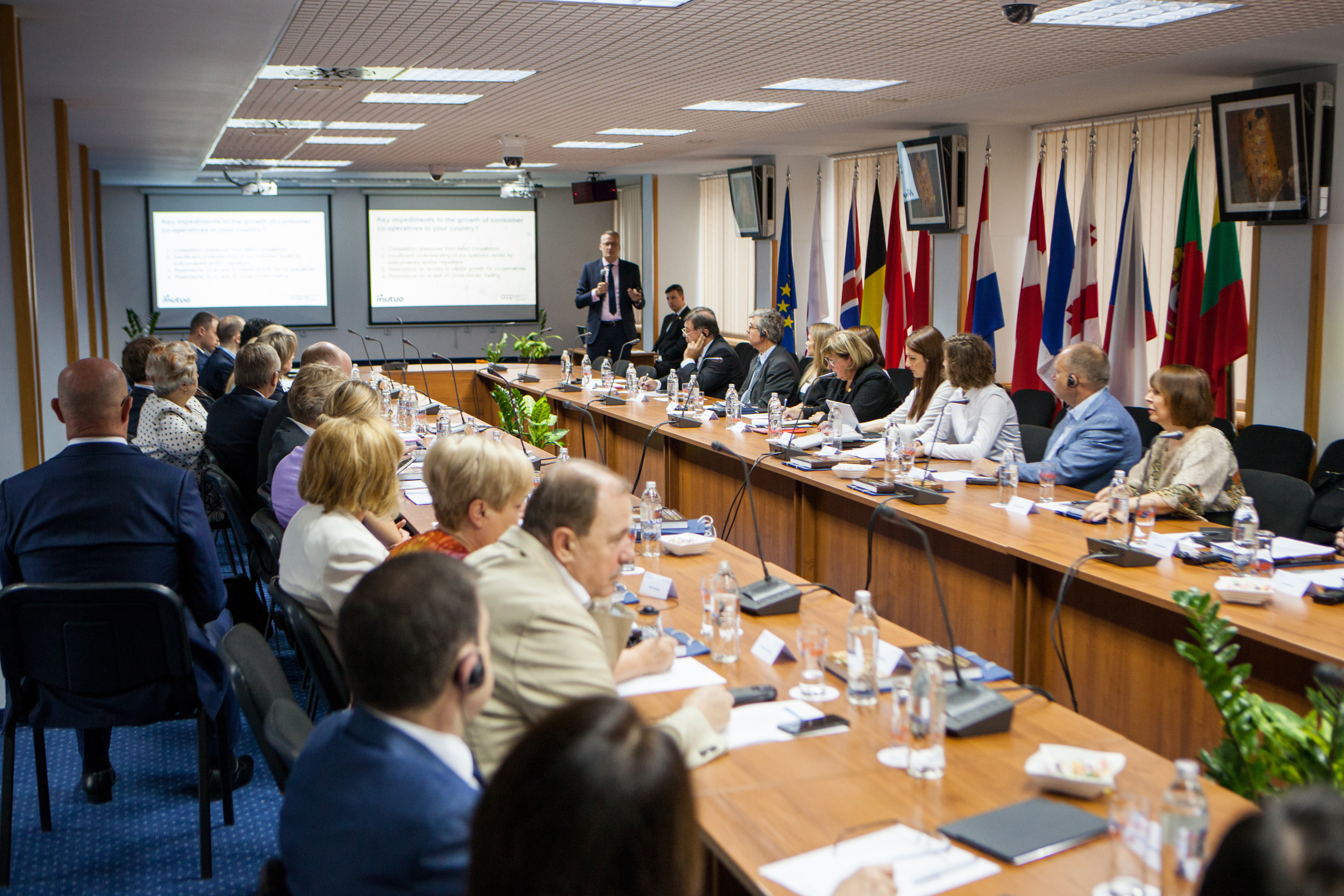 As far as facilitating co-operation among co-operatives, with particular reference to the CCW membership, PH put forward the following recommendations:

Regarding this last point, PH underlined that the World Co-operative Monitor does not correctly reflect the statistical reality of the consumer co-operative sector. Hence, he recommended that CCW should consider how to address this information deficit through a separate collection of verifiable statistics.

Mathias Fiedler (MF) started his intervention by recalling the history and principles of the Co-operative Blueprint for a Co-operative Decade, which was launched in 2012, the International Year of Co-operatives. Albeit welcoming it as a good idea, in principle, MF underlined the lack of attained results. He ascribed this to the fact that the Blueprint is too wordy, ambitious and too focused on consumer co-operatives, thus inadequate for co-operative in other sectors to identify with. He stressed the importance of utilizing the time up to 2020 wisely in order to draft a strategic document for the next decade. ZdK Germany believes that this new strategy should be based on three main principles: Visibility should be pursued through education (including co-operatives in curricula of the academic system from primary to secondary education) and through sharing with the wider world the many successful practices of co-operatives. Highlighting our values and principles should happen through building a network of co-operative museums, which preserve co-operative heritage, and a network of scientists and academia which represent the knowledge potential of our movement. And thirdly, focusing on a sustainable future could be done by linking co-operative history, values and principles with the aspirations of the young generations, as this would guarantee the co-operative idea’s survival and thriving.

Matti Pikkarainen (MP) illustrated the S-Group Vision and Strategy for 2020. In a nutshell, the organisation’s direction of travel can be summarized by the following slogan: “Superior Benefits and Ease from your own Store”. In order to achieve it, work will be mainly focused in three areas: 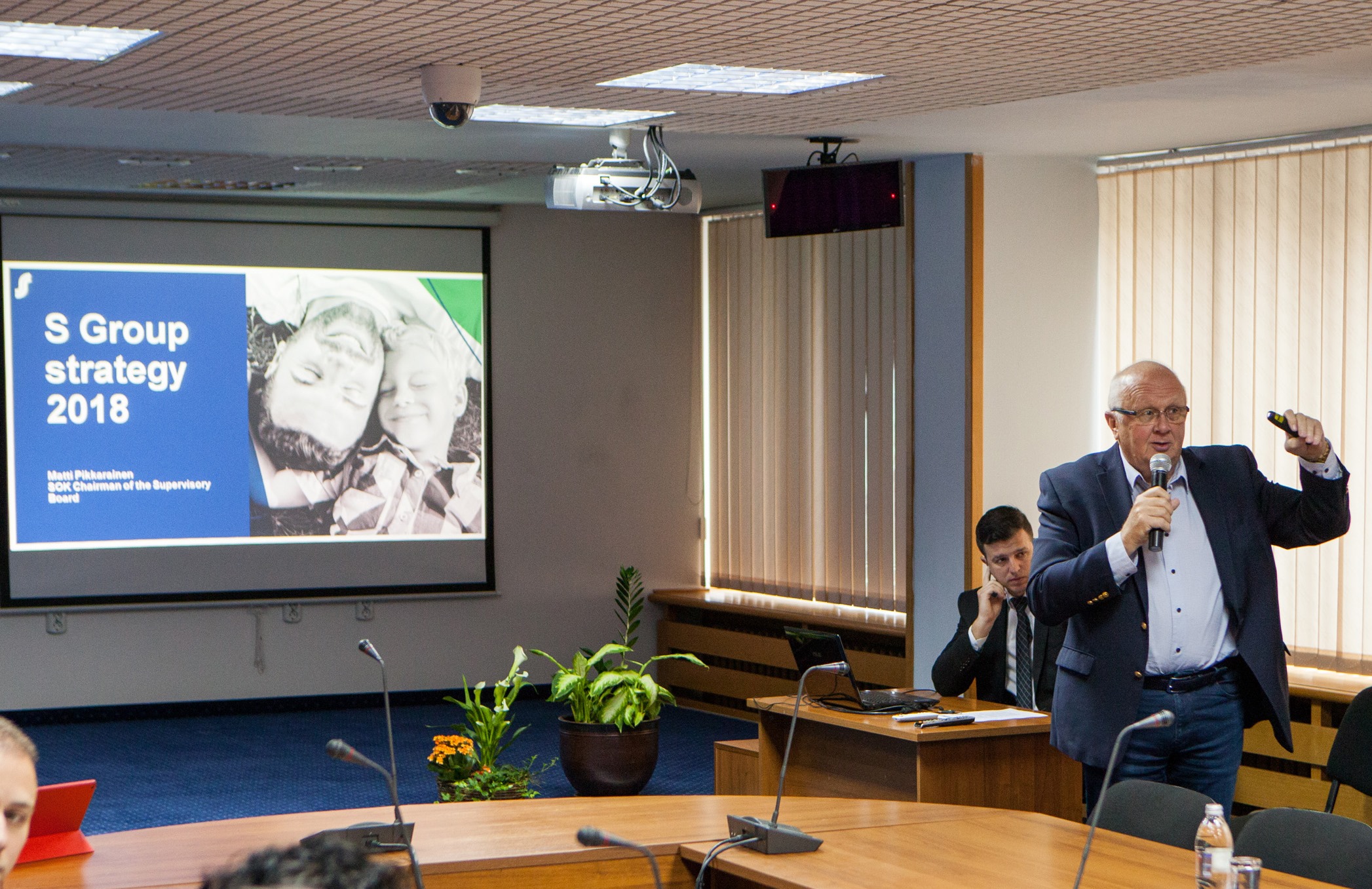 MP illustrated the structure and way of operating of the S-Group and highlighted in particular the work it carries out with young people and within the communities in which the different consumer co-operatives are set. The focus, in general, is being close to the consumers, and in particular, to the young shoppers. In the past, Finnish households would spend up to 50% of their monthly income on food, while today that share has dropped to 20%. This means that shoppers are spending more money on goods and services other than food. An example provided was that competition from China is a growing force, with an estimated 46.000 parcels arriving in Finland from China every day. Hence S Group’s aim is to focus on the young generation in order to understand it so as to provide the best offer for them outside the food domain.

Dr. Illia Gorokhovskyi (IG) introduced the different challenges facing Europe in the foreseeable future to 2030. Among those, he mentioned the rapid advancements in technology, the migration crisis and the changing labour market. Against this background, he put forward several ideas on how the consumer co-operative movement could positively contribute to Europe’s development from here until 2030. In this regard, he called CCW and Euro Coop members to:

He concluded his intervention by stressing the need to act as of now, without further ado and to do so with a single, unified voice; as the title of the Club of Rome report goes – “Come on!”.

Colin Macleod (CM) started his intervention by highlighting that to be a co-operative means to be an enterprise with a purpose which goes beyond profit and it is meaningful to the lives of the people it serves. Consumer co-operatives follow the principle of using commercial endeavor for social benefits, which drastically differentiates our model from the conventional business leaders who treat business as a game of bets, which, unfortunately, have negative human consequences. Europe is experiencing a period of profound change, which has structural societal repercussions. More often than not people are acting as consumers, rather than citizens, who focus on their rights, and seldom their responsibilities; while community trust has given way to an extreme interpretation and practice of individualism. Within this context, businesses are also changing, and this represents an opportunity for consumer co-operatives to emphasize their distinctiveness. As responsible businesses with a different model of ownership and governance, consumer co-operatives are best placed to consider the changes for the future and anticipate the challenges they bring. Being responsible means winning hearts, not wallets. Being ethical means offering people something to belong to, which no other business model can offer.

He stressed the importance of finding an emotional bond with customers in order to build and protect the sense of belonging to the co-operative history and community. He then screened the powerful video “Belonging is Everything”, which serves as the basis for the strategic development of the Channel Islands Co-operative Society. It illustrates, in a very emotional way, how consumer co-operatives serve their members in a meaningful and dignified manner.

Panel II: Innovation as a Key Factor for the Development of Consumer Co-operatives 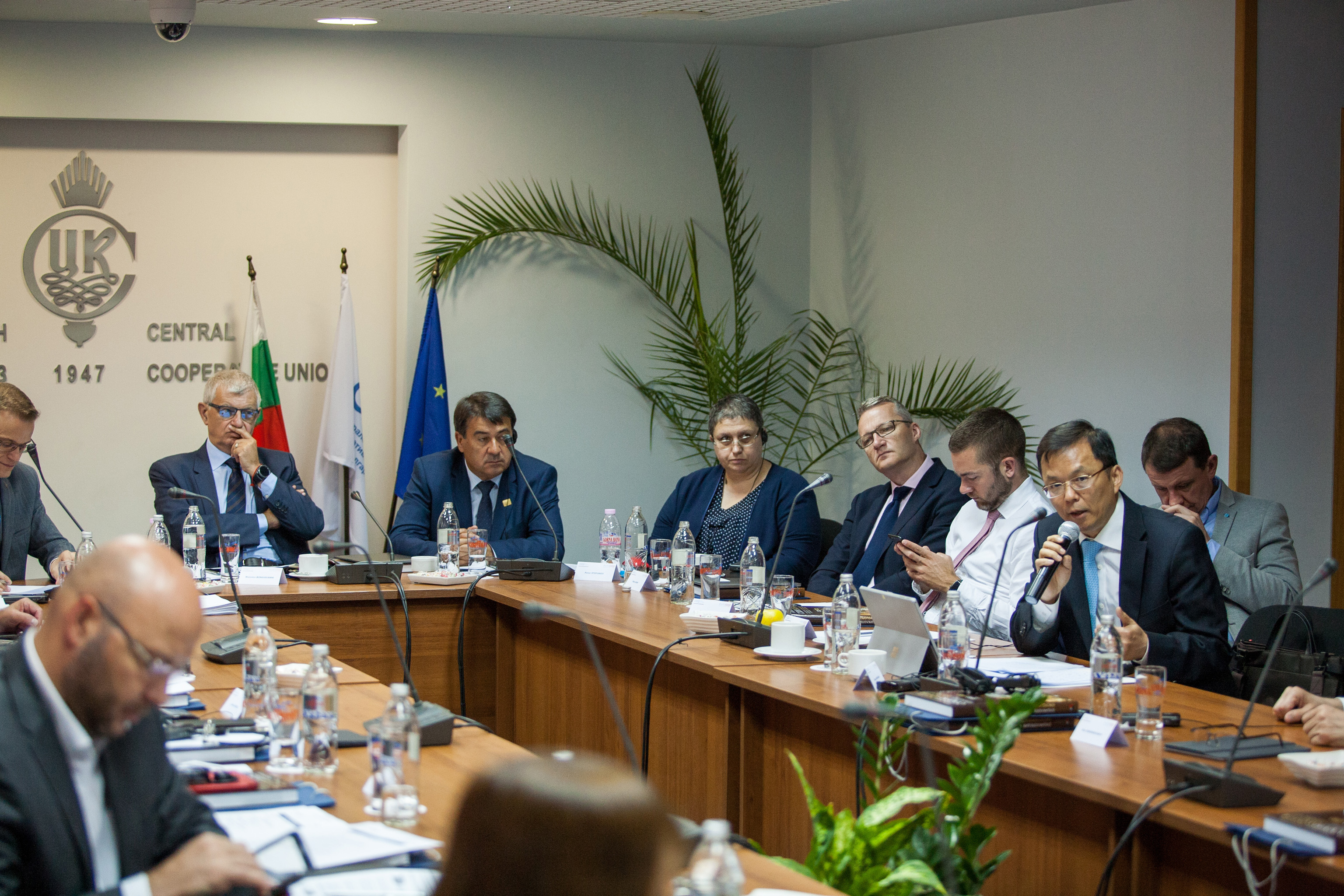 Zhang Wangshu (ZW) presented to the audience the e-commerce platform “China E-Coop”. Focused on serving agriculture, rural areas and farmers, it covers the whole country and combines online and offline data into one big data system. This is one of the main distinct features of the China Coop platform, as compared to other national and global players (e.g. Ali Baba), which do not have offline data. International businesses can take advantage from the platform by entering the dedicated “International Co-operative Products Pavilion”. To sell products through the pavilion, steps include:

ZW highlighted the successful cases of co-operation which have been already carried out with the Czech co-operatives for sparkling wine and with the Turkish ones for virgin olive oil and invited CCW/Euro Coop co-operators to join the China E-Coop Platform for future business opportunities. Anastasia Krivonosova (AK) presented the digital tool Coop Connect. A platform for development of digital co-operation, it is aimed at shaping a comfortable communication infrastructure for co-operative activities in each country, boosting international co-operation and creating a unified digital channel for interaction among co-operatives. Advantages of using the Coop Connect tool include:

Payments through the Coop Connect system are fulfilled through the QR-Code technology. AK also presented the Coop Shop concept, which forms always an integral part of the Coop Connect system. The idea behind is to form online communities of consumer co-operatives which are willing to buy goods and services at a price which they consider fair and hence leverage the collective buying power before a given seller.

Massimo Bongiovanni, PhD (MB) proceeded to the summary and operational conclusions of the conference. He underlined how consumer co-operatives need to protect their own interests but, at the same time, be progressive societal actors and have a non-protectionist, global perspective in their vision and action. He stressed how it is not true that co-operatives have to be, as some ideologies claim, only small-scaled enterprises in order to be considered true co-operatives.

Co-operatives can be large-sized enterprises without compromising on their values and principles. He then referred to innovation and e-commerce by saying that this is today’s reality but that giant leaps forward are made every day in digitalization, robotics, artificial intelligence, among other things, so it is crucial for the co-operative movement to keep up with these advancements. This is particularly true for the future of labour, which will be completely revolutionized in the next few years and decades. As technology develops into the domain of artificial intelligence, less human labour will be needed; thus this is will have significant and possibly existential repercussions for co-operatives. He concluded by saying that co-operation has a long history and the fact that the co-operative movement still exists is due to its capacy to change and adapt to the world around it and pointed out to the source of our potential - collective intelligence and the passion to take up the challenges which lie ahead.

Tags: Conference 2030 Vision Mission Future
Cookies
This site uses cookies to offer you a better browsing experience. Find out more on how we use cookies and how you can change your settings.
I accept cookies