JCCU received a "letter of appreciation" from the Ministry of Health, Labour and Welfare (MHLW) at the "2018 Food Sanitation Contributor and Excellent Food Sanitation Facility" Commendation ceremony, held on October 25, 2018.

The ceremony is organized by the Ministry and the Japan Food Hygiene Association every year. In commemoration of 70th Anniversary of the Food Sanitation Act, Ministry offered letters of appreciation to individuals and organizations that successfully advanced  food sanitation related projects.

JCCU was among the 50 organizations which received the high state honour. 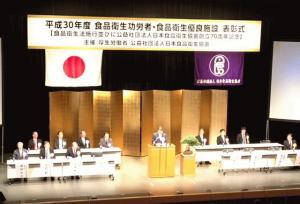 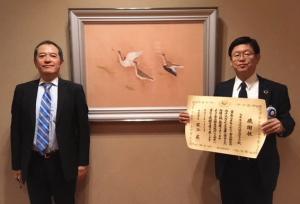 JCCU has made continuous efforts to disseminate information about Food Sanitation Act by providing information on the Act and offering opportunities for learning sessions along with co-op business federations, member co-ops, co-op members, and consumers nationwide.

Regarding the amendment of the Food Sanitation Act (1995, 2003 and 2018), JCCU submitted opinions repreenting the voice of consumers  and food business operators, and contributed to a better system reform.

Also in 2006, upon the introduction of the positive list system of agricultural chemicals, JCCU published the actual residual data on domestic and imported foods and also disseminated the purpose and significance of the system through organizing learning sessions with agricultural producers and food-related business operators, and ultimately provided information to stakeholders for the enforcement of the system.

The award was in appreciation of JCCU’s long-standing initiatives and efforts of improving food safety in Japan.